LabourStart's Photo of the Day Archive - 2022 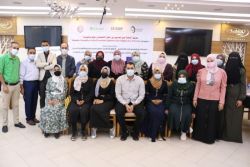 20220103 : In late October and early November the Democracy and Workers Rights Centre - Palestine conducted a workshop for Gaza workplace organizers. This was the third such workshop it has conducted with the title “Gender equality in the world of work – fundamental rights, ILO standards and domestic laws”. (Photo: DWRC) Click here for more union news from Palestine. 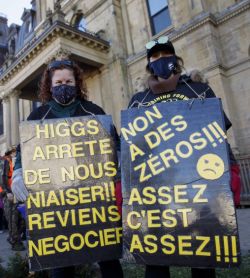 20220110 : This past fall, in the midst of the pandemic, 22,000 public sector workers in the Canadian province of New Brunswick struck to gain a wage increase and to protect their pensions. (Photo: CUPE) Click here for more union news from Canada. 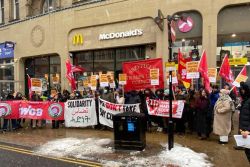 20220117 : Stuart Delivery couriers, members of the IWGB, have restarted the longest ever strike in the UK’s gig economy on 10 January, with picket lines returning to McDonald’s restaurants every day this week, after a hiatus over the Christmas holidays. (Photo: Brave New Europe) Click here for more union news from the UK. 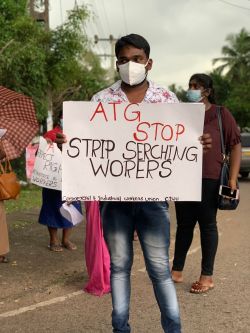 20220124 : Members of the Free Trade Zone & General Services Employees Union of Sri Lanka have remained active during the pandemic. They have taken on offensive employer behaviour, including strip searches of workers entering and leaving a so-called free trade zone, and recently won a global supply chain agreement in concert with other unions. (Photo: IndustriALL) Click here for more union news from Sri Lanka. 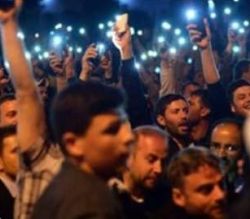 20220131 : Early Monday morning 200 workers, members of the Birlesik Metal-İŞ (United Metalworkers’ Union), were arrested during a protest in which the workers were demanding the recognition of their union and the return of workers who had been sacked for their union membership. The workers had occupied their workplace and under police pressure retreated to the roof where they were harassed by drones before being removed by hundreds of police (Photo: Anon.) Click here for more union news from Turkey. 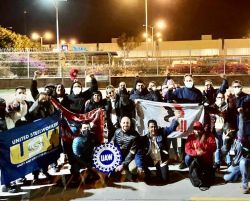 20220207 : With support from Canadian, USian and global trade unions, Mexican autoworkers last week voted overwhelmingly for a new union. The Sindicato Independente Nacional de Trabajadores y Trabajadoras de la Industria Automotriz (SINTTIA) won a crushing majority, with 76 per cent of the workers voting to replace the CTM-affiliated union which had been accused of being better at representing General Motors than the workers there. (Photo: IndustriALL) Click here for more union news from Mexico. 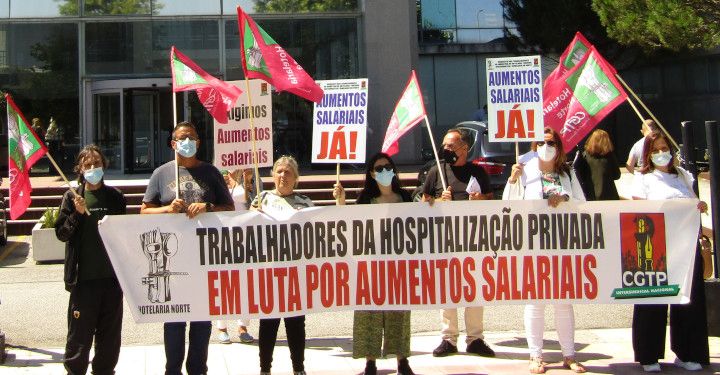 20220214 : FESAHT members celebrate their victory in a fight to win a substantial wage increase. Like these Portuguese workers, healthcare staff around the world are fighting for recognition and compensation for their work since the pandemic struck. (Photo: CGTP) Click here for more union news from Portugal. 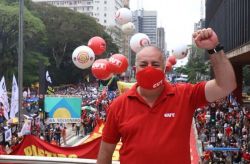 20220221 : Brazilian union centre the CUT has launched a national campaign to create local "Committees to Struggle in Defence of the Working Class, for Life and Democracy”. The committees will organize workers on a regional basis in the face of the Bolsonaro regime and in anticipation of national elections later this year. (Photo: CUT) Click here for more union news from Brazil. 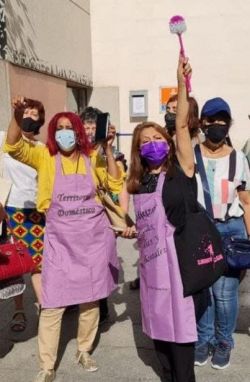 20220228 : This year on IWD Spain's CNT is organizing to focus attention on women domestic workers. The same workers are the focus of a joint LabourStart-International Domestic Workers Federation webinar on 8 March. (Photo: CNT) Click here for more union news from Spain. 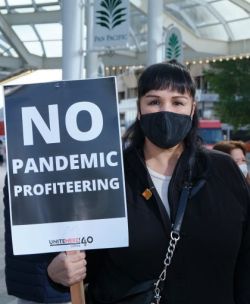 20220307 : Hotel workers in Vancouver, members of UNITE-HERE 40, are continuing their fight to reverse the sacking of 100 workers, 94 of them women of colour, early in the pandemic. (Photo: IUF) Click here for more union news from Canada. 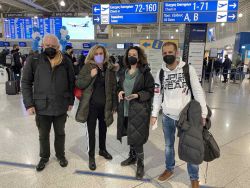 20220314 : A solidarity mission carrying half a ton of humanitarian aid for Ukrainian journalists left Athens on 9 March, headed by Maria Antoniadou, the President of the Journalists' Union of the Athens Daily Newspapers (JUADN). The International and European Federation of Journalists (IFJ/EFJ) praised the ”incredible show of solidarity” by JUADN who organized the mission in collaboration with the Unified Journalists Organization of Subsidiary Insurance and Health Care (EDOEAP) and supported by the Panhellenic Federation of Journalists Unions (PFJU). (Photo: IFJ) Click here for more union news from Ukraine. 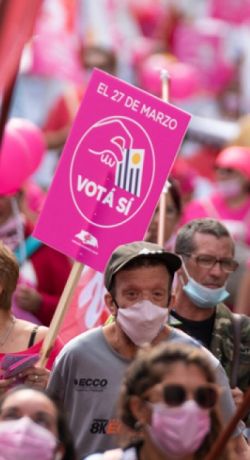 20220321 : Through much of the pandemic unions in Uruguay have been mobilizing workers to vote yes in a national referendum on 27 March. The referendum is the result of a campaign by the PIT-CNT union federation which saw almost 700,000 people sign a petition in support. It seeks to repeal the ruling right-wing government's 'Law of Urgent Consideration' which restricts may civil rights, including the right to strike, and which gives the police the power to end strikes and protests of any kind. (Photo: PIT-CNT) Click here for more union news from Uruguay.

20220328 : Indian trade unions have united to organize a 2-day national general strike against the privatization policies of the Hindu nationalist BJP government. Millions of workers are participating. Here LabourStart supporter Meena Patel of the KSSS and the Bandhkam Mazdoor Vikas Sangh (Construction and Industrial Workers Security and Development Union) speaks with the BBC about why Indian workers are so opposed to the economic policies of the Modi regime. (Photo: M. Upadhyaya) Click here for more union news from India.

20220404 : Turkish workers, members of Enerji-Sen Union, including Chairman Süleyman Keskin, were detained by police on 30&31 March and 1 April whilst picketing outside the headquarters of E.ON-EnerjiSA. They were protesting unjest dismissals, poor working conditions and union-busting. The union represents contract and other precariously employed workers in the energy sector. (Photo: DISK) Click here for more union news from Turkey. 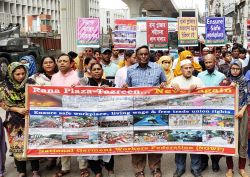 20220411 : With Rana Plaza Murder Day approaching (24 April), the National Garment workers Federation of Bangladesh is holding a series of events all this month. This "Rana Plaza, Tazreen - Never Again" rally was held on 1 April. 0n 24 April 2013, 1134 workers, most of them women, died when the Dhaka factory they were working in collapsed. (Photo: NGWF) Click here for more about the Rana Plaza disaster. 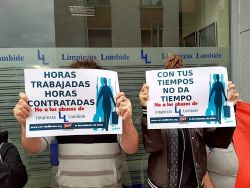 20220418 : One of Spain's most storied unions, the CNT, recently launched a national campaign to organize building cleaners and domestic workers using the slogan "It's up to the cleaners to clean up bad practices". Among other things, the campaigns aims to enforce reasonable hours of work and end gender-based harassment. (Photo: CNT) Click here for more labour news from Spain. 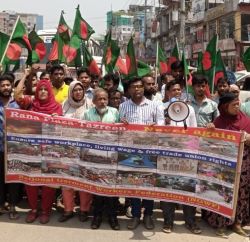 20220424 : 24 April is 'Rana Plaza Murder Day' for garment workers in Bangladesh. On that date in 2013, 1134 workers died in the worst act of industrial murder in modern history. Each year the National Garment Workers Federation marks the anniversary with marches, rallies and memorials. (Photo: NGWF) Click here for more labour news from Bangladesh. 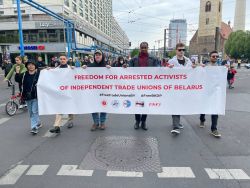 20220502 : On 19 April a new wave of repression against independent trade unions in Belarus began. The state security agency, the KGB, arrested most of the leadership of the Congress of Democratic Trade Unions (BKDP). Despite a severe political crackdown, the BKDP has condemned Russia’s invasion of Ukraine. On May Day workers around the world, like these in Berlin, called for an end to the attacks on trade unions in Belarus and for the release of those arrest last month. (Photo: Anon.) Click here to send a message protesting the arrests. 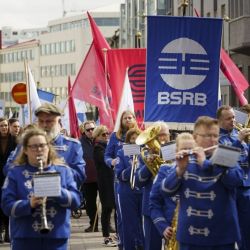 20220509 : Trade unions in Iceland, as in many countries around the world, celebrated May Day with marches, picnics, rallies and festivals. Here members of BSRB, the principal public sector union in Iceland, march behind their band in a parade through the streets of Reykjavik. (Photo: BSRB) Click here to see more labour news from Iceland. 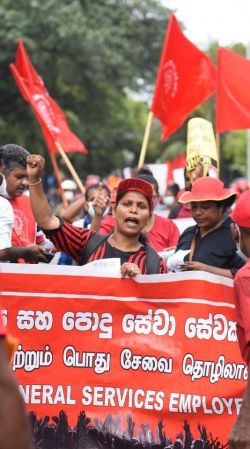 20220516 : Last week Sri Lanka's trade unions called for a national general strike against not only government economic policy but also the banning of trade union activity in large segments of the economy and a 'shoot to kill' order aimed at ending weeks of popular protests. (Photo: IndustriALL) Click here to see more labour news from Sri Lanka. 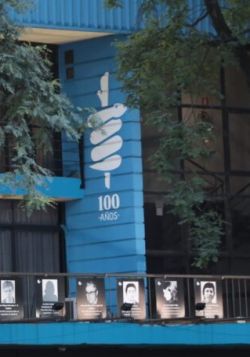 20220523 : Each 20 May trade unions and other civil society organizations in Uruguay unite in the annual Marcha del Silencio or Silent March. The event is a reminder that many victims of the country's military dictatorship were disappeared without a trace and participants demand justice for them and for their families. This year the SMU, Uruguay's medical doctors union, displayed photos of the disappeared on its office in Montevideo (Photo: SMU) Click here to see labour news from Uruguay. 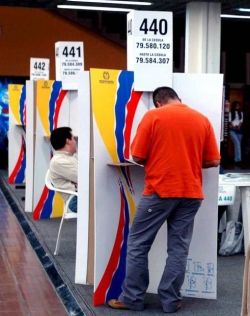 20220530 : Last week trade unions from across the Americas sent delegations to observe the conduct of Sunday's presidential election in Colombia. Also participating were representatives from the ITUC, and global union federations PSI, IndustriALL, the ITF, UNI, BWI and the Education International. (Photo: Mundo Gremial) Click here to see labour news from Colombia. 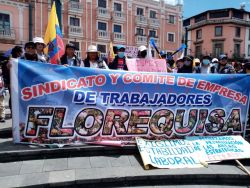 20220606 : Cut flower workers, the vast majority of them indigenous women, in Ecuador have been on strike for a year as they struggle to force their employer to negotiate a new collective agreement. State agencies are colluding with the employer in its refusal to bargain. (Photo: Rel UITA) Click here to see labour news from Ecuador. 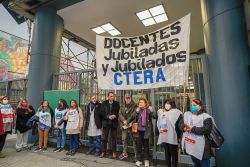 20220620 : Around the world the surge in the cost of living is having an impact on all workers, but especially on pensioners. These retired Argentine teachers were demanding an increase to their pensions as inflation in that country hit 29.3% earlier this month. (Photo: Mundo Gremial) Click here for more union news from Argentina. 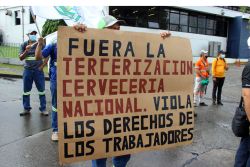 20220627 : On 23 June the Unitary Federation of the Working Class (FUCLAT) and the Union of Workers of the Brewing Industry of Panama (STICP) protested against increased outsourcing by AB InBev, a huge multinational beverage company. (Photo: Rel UITA) Click here for more union news from Panama.